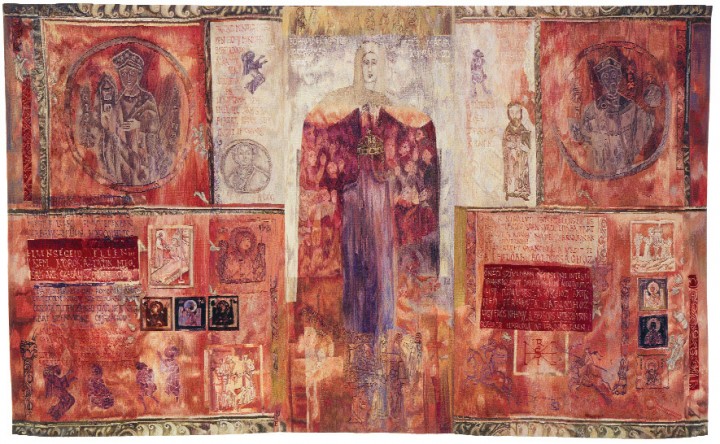 King Stephen the Saint and His Work

It belongs to the Esztergom Christian Museum: Haute-lisse, 300x550 cm

King Stephen the Saint and His Work – Tapestry for the Millennium

King Stephen the Saint and His Work - Tapestry for the Millennium

From a methodological point of view, this Millenary tapestry opened new horizons; the idea of collective creation is fully justified by the subsequent wonderful pieces produced by the Association. In order to understand its genre and content better, the concept of historic collage may be the most appropriate definition. There are references to art history and literature by using various age-old sewing techniques, from various historic periods.

The common denominator in all of them is that they recall the age of Saint Stephen’s reign and the ideas associated with his age by the posterity.

The first tapestry of the Association of Hungarian Tapestry Artists’ was woven in collaboration. The participating artists wove the pieces of the work ‘Tapestry without Borders’ separately, then sewed it together creating a huge surface.

The millecentenary tapestry provided an opportunity for even closer co-operation for the 33 artists.The basic principles and metho­dology of the task accomplishment turned step by step into a novel and clear system during the process of creation. In 1998, at first the aim was common: the worthy celebration of the foundation of the Hungarian state. During the stage of collecting motifs and delving into the historic memory of the nation, Saint Stephen and II Pope Sylvester, who sent him the crown became the central figures.

A true awareness of the traditional function of tapestry also played a role in the idea to ‘dress’ the wall of the chapel in the northern tower of the Esztergom Basilica about to be renovated. The chapel is but a few metres from the exact spot deemed to be the coronation place according to archeological findings. After examining the scene, several artists drew sketches but the cummulative costs of the monument restoration and that of the tapestry weaving seemed insurmountably high. In order to ensure the realization of the plan, the whole conception needed changing. Work­ing together with the head curator of the Christian Museum, the plan of a 18 square meter tapestry was drawn up, designed to be displayed in an exhibition hall.

The delegates of the Association visited Esztergom several times and kept networking about any emerging new opportunities. It was then that the design acquired the title ‘King Stephen the Saint and His Work’. The Christian Museum took upon itself a part of the funding in order to ensure the success of the tender submitted to the Office of the Hungarian Governor for the Millennium. Ildikó Dobrányi (1949–2007) made superhuman efforts to create the necessary conditions for the designing and weaving of the tapestry.

The recently departed president of the association managed the financial administration, motivated the participants, solved the controversial issues and generally maintained a multilateral, yet purpose oriented com­munication, occasionally not devoid of disagreements. The participants succeeded in agreeing to regard the work as a definitely collective manifestation, based on individual planning. The transition from individuality to collectivity in the sensitive field of authorship was brought about by the standard grouping procedure in the process of planning. Each participant had designed the first plans individually, then these were presented at a work session.

It soon became evident that the drafts, greatly varying in style and topic, nevertheless fell into three basic categories. Consequently, three groups were formed, whose members feverishly drew and painted a comprehensive plan. Subsequently, they agreed to submit these cartons to the jury without listing the authors’ names. On one hand, this procedure eliminated any possible personal subjectivity on the part of the jury, on the other hand, it made certain that the winning project should be felt as collectively owned, since the results received did not list names. The jury, called upon by the Christian Museum, chose one plan for implementation from the three submitted ones, with the minutely detailed condition that they should take over motifs and colours from the other two.

The final version was produced, slightly altered later on, as a result of ulterior claims on behalf of both the Christian Museum and those of the artists themselves. The weaving itself was started on three separate looms in the recently established Budacastle Workshop. With the constant presence of Emese Csókás, nine artists could work simultaneously. It was presented to the general public in the rotunda of the Esztergom Basilica at Chrismas in 2000. In March 2001, the tapestry was moved from the basilica to its permanent place in the Christian Museum. For several months the various plans, as well as pictures and documentaries about the weaving were displayed at a temporary exhibition.

From a methodological point of view, the millecentenary tapestry opened new horizons; the idea of collective creation is fully justified by the subsequent wonderful pieces produced by the Association. Regarding its content, for the genre definition, the concept of ‘historic collage’ may be appropriate. They are art history and literary remembrances manufactured with various techniques, from various historic periods. The common denominator in all of them is that they all recall the age of Saint Stephen’s rule and all the thoughts posteriority linked to this age. On the longitudinal axis the figure of the Holy Mary appears in her cloak inspired by her depiction in the mural at Vizsoly.

Her cloak protects a host of people, whereas her hands safeguard the Holy Crown. On the surfaces of various sizes, delineated by broken moulds or narrow bands, the coronation mantle, the Illustrated Chronicle and several enlarged details of the crown are represented. Several smaller motifs cannot be traced back to their original source; it can only be suspected which representations from the Middle Ages served as their models. Textiles, codices, works of goldsmiths, documents, paintings unfold in front of us. The composition is held together by the mould patterns and the harmony of the brownish-reddish colours. Saint Stephen’s admonitions formulate morals valid in our modern age, as well. Observing them can be the guarantee for the country’s future.
Ildikó Kontsek 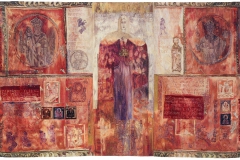 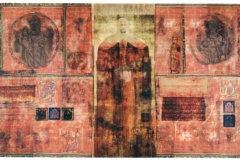 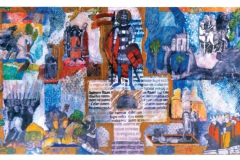 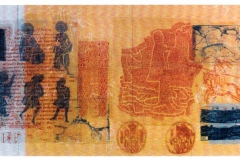 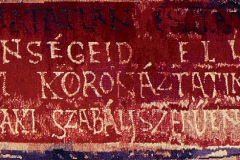 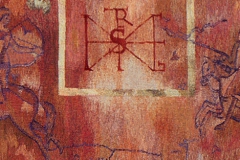 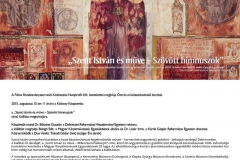