The Lights of Europe

Here the characteristics that artists deem to be additionally important in this civilization, cultural, historical and spiritual union, is woven into words quoting the paragraph from the European Union’s founding document, which reads as follows:
The Union is founded on the values of respect for human dignity, liberty, democracy, equality, the rule of law and respect for human rights, including the rights of persons belonging to minorities.

The Lights of Europe

These values are common to the Member States. The fifteen artists participated in a joint work on honoring of Europe’s ideals by incorporating their own common values within the woven work, showing perseverance and a profound dedication to this community of common values. This imposing tapestry radiates brilliantly its vision and its suggestivematerialism.


In 2010 the artists of the Hungarian Tapestry Artists’ Association undertook the creation of a collective tapestry, entitled ‘The Lights of Europe’, in honour of Hungary’s presidency in European Union in the first half of 2011. This gesture has significant antecedents. In 1995–1996, for the Hungarian Millecentenary (the celebration of the Settlement of the Magyars), the artists of the Association produced the 10.5 square metre work Tapestry without Borders, with the collaboration of forty-six creators.

This was followed in 1999–2000 by the 18 square-metre sized ‘St. Stephan And His Work’ woven by 34 artists in honour of the Hungarian Millenium (the anniversary of the Hungarian state) and then, in 2003–2006 the 20 square metre Corvin tapestries for the Renaissance year, produced by 36 artists collectively. The artists are all members of the Hungarian Tapestry Artists’ Association, whose membership is solely granted to those professionals, who have already proven to be worthy of the honour with their previous work of exceptional quality. The idea of a new, collectively woven Europe tapestry came into being gradually, through an internal project.

As a result of processing the individual applications, the plan started taking shape. It was formulated that the work to be created should represent the whole universe, yet with emphasis on our planet, the Earth and Europe’s presence and role on it should be highlighted. It should also contain reference to the great European cultural heritage, the Greek mythology and depict basic human rights issues important to all of us. The plan itself suggested that this work will greatly differ in its conception from the previous ones, which focused on history and the past, paying close attention to the illustration of ages long gone. In fact, this work tells us about the present. The visual and colour plan, carton model was devised by 4 or 5 artists and the monumental weaving could begin in the spring of 2010.

The work produced of wool, made more varied by the interweaving of metal threads, is a homo­­genous, nobly elegant horizontal tapestry based on the colour blue and its nuances, tonalities. The stronger hues mark the universe, the Earth and Europe on it, which is not separated from the rest of its territories. An unified homogenous blue surface encompasses the composition like a kind of mould, however, not as a rigid band but indicating an organic unity. In the infinity of the universe constellations emerge, our planet is surrounded by a dignified stellar system, which arches familiarly on the right, depicting space as if it were cast into the infinite. Whereas on the left side, Europe’s abduction is portayed with graphic refinement, woven clearly.

The Zeus bull seems to be stepping out of the material and Europe, with a hint of irony, is sitting both frightened and liberated on the galloping god’s back. In the central band of the tapestry Europe shows itself almost proudly on the basis of a satellite picture. This is one of the centres of the civilised world. In vain is there darkness and blackness in the universe, in other parts of the Earth, Europe is bright, almost illuminating the whole Earth or possibly even the space beyond… Past and present. History and industrial world. Borderlessness and limitedness. Europe emerged, exists, develops, expands and is self-confident… In this work Europe is both reality and symbol. The blue, white points, spots, arches, motifs in the darkness of the seas convey excitement to the sight.

The power of conviction of the tapestry is not provocative but subtly arousing emotions. And what the artists deem to be additionally important in this civilisational, cultural, historical and spiritual unity, is woven into words, quoting the paragraph from the European Union’s founding document, as follows: ‘The Union is founded on the values of respect for human dignity, liberty, democracy, equality, the rule of law and respect for human rights, including the rights of persons belonging to minorities. These values are common to the Member States.’ And there are references to this in English, French, and German, with unusual letter shapes.

The lines are characteristically woven in a lighter blue against the background of darker hues, sometimes hiding enigmatically, yet still decipherable, legible whereas the ending ‘these values are common’ is of an emphatic orange-reddish colour, thus being strongly highlighted. Correctly so. Europe is the world of common values. The fifteen artists, honouring Europe’s ideal, have found their own common values. With persevering, creative work they have woven this ideal, just like the lights of Europe. The artists left behind their, possibly customary, loneliness. Europe is the community of common values and this is what the imposing tapestry radiates with its vision and its suggestive materialism. 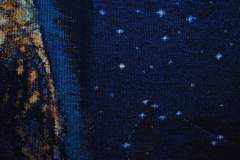 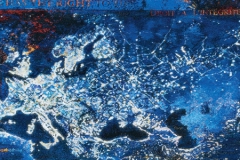 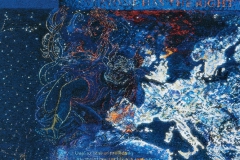 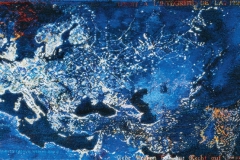 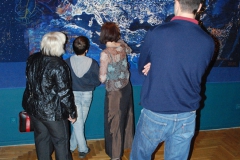 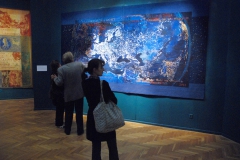 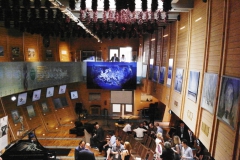 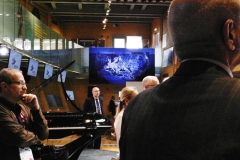 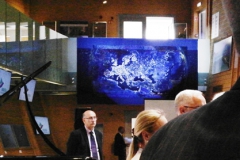 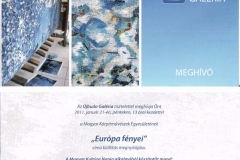